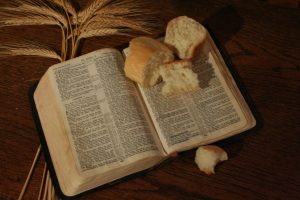 9-14  “There is a boy here who has five barley loaves and two fish. But what are they among so many people?” Jesus said, “Make the people sit down.” Now there was a great deal of grass in the place; so they sat down, about five thousand in all. Then Jesus took the loaves, and when he had given thanks, he distributed them to those who were seated; so also the fish, as much as they wanted.  When they were satisfied, he told his disciples, “Gather up the fragments left over, so that nothing may be lost.”  So they gathered them up, and from the fragments of the five barley loaves, left by those who had eaten, they filled twelve baskets. When the people saw the sign that he had done, they began to say, “This is indeed the prophet who is to come into the world.”

18-21  The sea became rough because a strong wind was blowing.  When they had rowed about three or four miles, they saw Jesus walking on the sea and coming near the boat, and they were terrified.  But he said to them, “It is I; do not be afraid.”  Then they wanted to take him into the boat, and immediately the boat reached the land toward which they were going.

16-19  I pray that, according to the riches of his glory, he may grant that you may be strengthened in your inner being with power through his Spirit,  and that Christ may dwell in your hearts through faith, as you are being rooted and grounded in love. I pray that you may have the power to comprehend, with all the saints, what is the breadth and length and height and depth,  and to know the love of Christ that surpasses knowledge, so that you may be filled with all the fullness of God.

6-7  You would confound the plans of the poor, but the LORD is their refuge. O that deliverance for Israel would come from Zion! When the LORD restores the fortunes of his people, Jacob will rejoice; Israel will be glad.

a reflective worship instrumental for these demanding, pandemic times
mp3