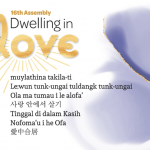 This weekend the 16th National Assembly of my church, the Uniting Church in Australia meets.  I am among the Assembly members.  A few weeks back, inspired by the Dwelling in Love theme, I wrote this song, called Dwelling.  See what you think.  Meanwhile, please keep the Assembly in your prayers. Blessings. 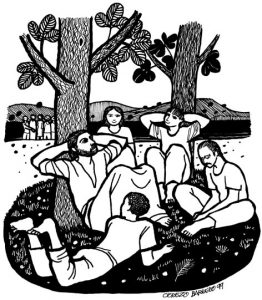 The apostles gathered around Jesus, and told him all that they had done and taught.  He said to them, “Come away to a deserted place all by yourselves and rest a while.” For many were coming and going, and they had no leisure even to eat. And they went away in the boat to a deserted place by themselves. Now many saw them going and recognized them, and they hurried there on foot from all the towns and arrived ahead of them.

As he went ashore, he saw a great crowd; and he had compassion for them, because they were like sheep without a shepherd; and he began to teach them many things.When they had crossed over, they came to land at Gennesaret and moored the boat. When they got out of the boat, people at once recognized him, and rushed about that whole region and began to bring the sick on mats to wherever they heard he was. And wherever he went, into villages or cities or farms, they laid the sick in the marketplaces, and begged him that they might touch even the fringe of his cloak; and all who touched it were healed.

11-17   So then, remember that at one time you Gentiles by birth, called “the uncircumcision” by those who are called “the circumcision” –a physical circumcision made in the flesh by human hands–  remember that you were at that time without Christ, being aliens from the commonwealth of Israel, and strangers to the covenants of promise, having no hope and without God in the world.  But now in Christ Jesus you who once were far off have been brought near by the blood of Christ.

For he is our peace; in his flesh he has made both groups into one and has broken down the dividing wall, that is, the hostility between us.  He has abolished the law with its commandments and ordinances, that he might create in himself one new humanity in place of the two, thus making peace,  and might reconcile both groups to God in one body through the cross, thus putting to death that hostility through it. So he came and proclaimed peace to you who were far off and peace to those who were near …

4-10  But that same night the word of the LORD came to Nathan:  Go and tell my servant David: Thus says the LORD: Are you the one to build me a house to live in?  I have not lived in a house since the day I brought up the people of Israel from Egypt to this day, but I have been moving about in a tent and a tabernacle.  Wherever I have moved about among all the people of Israel, did I ever speak a word with any of the tribal leaders of Israel, whom I commanded to shepherd my people Israel, saying, “Why have you not built me a house of cedar?”  Now therefore thus you shall say to my servant David: Thus says the LORD of hosts: I took you from the pasture, from following the sheep to be prince over my people Israel; and I have been with you wherever you went, and have cut off all your enemies from before you; and I will make for you a great name, like the name of the great ones of the earth. And I will appoint a place for my people Israel and will plant them, so that they may live in their own place, and be disturbed no more; and evildoers shall afflict them no more, as formerly …

20-29   I have found my servant David; with my holy oil I have anointed him; my hand shall always remain with him; my arm also shall strengthen him. The enemy shall not outwit him, the wicked shall not humble him. I will crush his foes before him and strike down those who hate him. My faithfulness and steadfast love shall be with him; and in my name his horn shall be exalted.  I will set his hand on the sea and his right hand on the rivers.  He shall cry to me, ‘You are my Father, my God, and the Rock of my salvation!’ I will make him the firstborn, the highest of the kings of the earth.  Forever I will keep my steadfast love for him, and my covenant with him will stand firm.  I will establish his line forever, and his throne as long as the heavens endure.