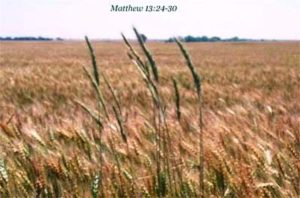 13:36-43 Then he left the crowds and went into the house. And his disciples approached him, saying, “Explain to us the parable of the weeds of the field.”  He answered, “The one who sows the good seed is the Son of Man;  the field is the world, and the good seed are the children of the kingdom; the weeds are the children of the evil one,  and the enemy who sowed them is the devil; the harvest is the end of the age, and the reapers are angels.  Just as the weeds are collected and burned up with fire, so will it be at the end of the age.   The Son of Man will send his angels, and they will collect out of his kingdom all causes of sin and all evildoers,  and they will throw them into the furnace of fire, where there will be weeping and gnashing of teeth.   Then the righteous will shine like the sun in the kingdom of their Father. Let anyone with ears listen!

8:12-17  So then, brothers and sisters, we are debtors, not to the flesh, to live according to the flesh —  for if you live according to the flesh, you will die; but if by the Spirit you put to death the deeds of the body, you will live.  For all who are led by the Spirit of God are children of God.  For you did not receive a spirit of slavery to fall back into fear, but you have received a spirit of adoption. When we cry, “Abba! Father!”  it is that very Spirit bearing witness with our spirit that we are children of God,  and if children, then heirs, heirs of God and joint heirs with Christ–if, in fact, we suffer with him so that we may also be glorified with him.

139:1-3  O LORD, you have searched me and known me.  You know when I sit down and when I rise up; you discern my thoughts from far away.   You search out my path and my lying down, and are acquainted with all my ways.  139:23-24 Search me, O God, and know my heart; test me and know my thoughts.  See if there is any wicked way in me, and lead me in the way everlasting

28:10 Jacob left Beer-sheba and went toward Haran.  He came to a certain place and stayed there for the night, because the sun had set. Taking one of the stones of the place, he put it under his head and lay down in that place.  And he dreamed that there was a ladder set up on the earth, the top of it reaching to heaven; and the angels of God were ascending and descending on it.   And the LORD stood beside him and said, “I am the LORD, the God of Abraham your father and the God of Isaac; the land on which you lie I will give to you and to your offspring … 28:16-19a. Then Jacob woke from his sleep and said, “Surely the LORD is in this place–and I did not know it!”   And he was afraid, and said, “How awesome is this place! This is none other than the house of God, and this is the gate of heaven.”   So Jacob rose early in the morning, and he took the stone that he had put under his head and set it up for a pillar and poured oil on the top of it.  He called that place Bethel; but the name of the city was Luz at the first.