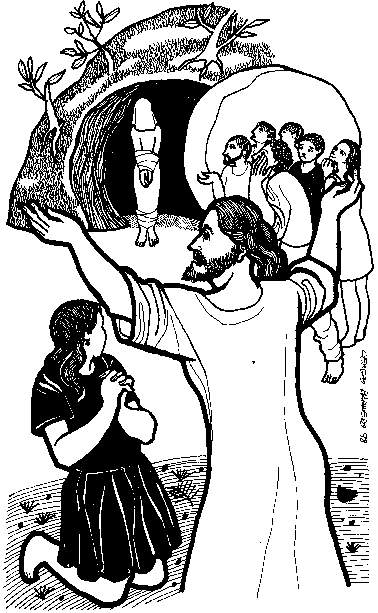 33-45 When Jesus saw her weeping, and the Jews who came with her also weeping, he was greatly disturbed in spirit and deeply moved. He said, “Where have you laid him?” They said to him, “Lord, come and see.” Jesus began to weep. So the Jews said, “See how he loved him!” But some of them said, “Could not he who opened the eyes of the blind man have kept this man from dying?” Then Jesus, again greatly disturbed, came to the tomb. It was a cave, and a stone was lying against it. Jesus said, “Take away the stone.” Martha, the sister of the dead man, said to him, “Lord, already there is a stench because he has been dead four days.” Jesus said to her, “Did I not tell you that if you believed, you would see the glory of God?” So they took away the stone. And Jesus looked upward and said, “Father, I thank you for having heard me. I knew that you always hear me, but I have said this for the sake of the crowd standing here, so that they may believe that you sent me.” When he had said this, he cried with a loud voice, “Lazarus, come out!” The dead man came out, his hands and feet bound with strips of cloth, and his face wrapped in a cloth. Jesus said to them, “Unbind him, and let him go.” Many of the Jews therefore, who had come with Mary and had seen what Jesus did, believed in him.

3-8 If you, O LORD, should mark iniquities, Lord, who could stand?  But there is forgiveness with you, so that you may be revered.  I wait for the LORD, my soul waits, and in his word I hope;  my soul waits for the Lord more than those who watch for the morning, more than those who watch for the morning.  O Israel, hope in the LORD! For with the LORD there is steadfast love, and with him is great power to redeem.   It is he who will redeem Israel from all its iniquities

1-5 The hand of the LORD came upon me, and he brought me out by the spirit of the LORD and set me down in the middle of a valley; it was full of bones.  He led me all around them; there were very many lying in the valley, and they were very dry.  He said to me, “Mortal, can these bones live?” I answered, “O Lord GOD, you know.”  Then he said to me, “Prophesy to these bones, and say to them: O dry bones, hear the word of the LORD.  Thus says the Lord GOD to these bones: I will cause breath to enter you, and you shall live.