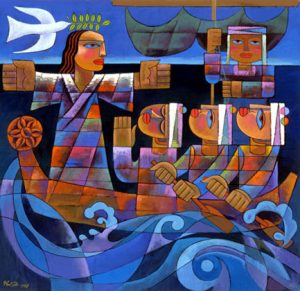 On that day, when evening had come, he said to them, “Let us go across to the other side.”  And leaving the crowd behind, they took him with them in the boat, just as he was. Other boats were with him. A great windstorm arose, and the waves beat into the boat, so that the boat was already being swamped. But he was in the stern, asleep on the cushion; and they woke him up and said to him, “Teacher, do you not care that we are perishing?” He woke up and rebuked the wind, and said to the sea, “Peace! Be still!” Then the wind ceased, and there was a dead calm. He said to them, “Why are you afraid? Have you still no faith?”  And they were filled with great awe and said to one another, “Who then is this, that even the wind and the sea obey him.”

4-6  but as servants of God we have commended ourselves in every way: through great endurance, in afflictions, hardships, calamities, beatings, imprisonments, riots, labors, sleepless nights, hunger; by purity, knowledge, patience, kindness, holiness of spirit, genuine love … 10 as sorrowful, yet always rejoicing; as poor, yet making many rich; as having nothing, and yet possessing everything.

17:45 But David said to the Philistine, “You come to me with sword and spear and javelin; but I come to you in the name of the LORD of hosts, the God of the armies of Israel, whom you have defied.

9-11  The LORD is a stronghold for the oppressed, a stronghold in times of trouble.  And those who know your name put their trust in you, for you, O LORD, have not forsaken those who seek you.  Sing praises to the LORD, who dwells in Zion. Declare his deeds among the peoples.

14-16  David had success in all his undertakings; for the LORD was with him. When Saul saw that he had great success, he stood in awe of him.  But all Israel and Judah loved David; for it was he who marched out and came in leading them.

How very good and pleasant it is when kindred live together in unity! It is like the precious oil on the head, running down upon the beard, on the beard of Aaron, running down over the collar of his robes.  It is like the dew of Hermon, which falls on the mountains of Zion. For there the LORD ordained his blessing, life forevermore.

Seasons Instrumentals will be released on: